The People of the British Isles (PoBI) project was initiated by Sir Walter Bodmer in 2004, in an effort to create the first ever detailed genetic map of a country. The United Kingdom’s history bristles with immigrations, wars and invasions, so the PoBI researchers faced a tremendous task in investigating how past events impacted the genetic makeup of modern British people.

We recruited volunteers whose four grandparents were born in rural areas of Britain, within 50 miles from one another. We collected blood samples as a source of DNA for our genetic studies. Since our DNA is really a mixture of our ancestors’ DNA we could use it to look back in time and study the ancestry over centuries past. A subset of our samples (2039) was extensively analysed, and the groundbreaking results were published in Nature on the 19th of March 2015 (see Population Genetics). Results included a map (image below) showing a remarkable concordance between genetic and geographical clustering of our samples across the United Kingdom. The analyses were developed even further and showed relationships of the UK genetic clusters to the genetics of surrounding European groups (see Population Genetics for detailed information). 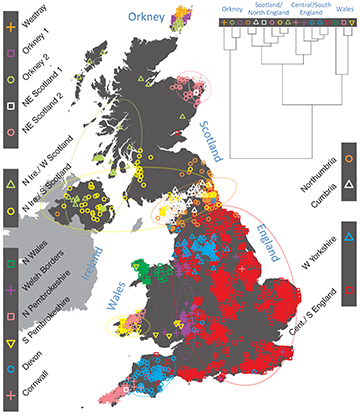 Currently we are studying the genetics underlying facial features. The human face is very variable and the fact that the faces of identical twins are so very similar lets us assume that the variability is genetically determined. Francis Galton pioneered the idea that twins could be used to study different effects of “nature and nurture” on various human traits. He also argued that the resemblance of monozygotic twins was more due to nature than nurture. We secured further funding and went back to our PoBI volunteers to take 3D photos of their faces. We also took 3D photos of a large set of twins who are part of TwinsUK dataset, and invited individuals with East Asian ancestry to join our project in order to help identify features that are controlled by genes (read more in Face Genetics). 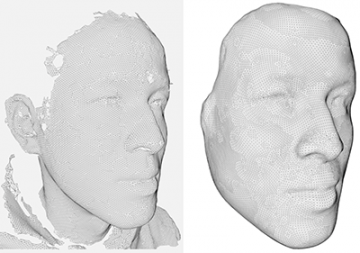